The banner, in Belfast’s Tiger’s Bay area, contained allegations about the Sinn Féin North Belfast election candidate and his family.

Mr Dodds said the DUP had nothing to do with the banner.

He said the Democratic Unionist Party (DUP) had been “crystal clear” on the use of violence and the activity of those who take part in “vile internet trolling” of victims and some unionist politicians.

However, he also challenged Sinn Féin not to be selective, calling on republicans to “stop eulogising the violent perpetrators of the IRA” including the gunman who shot a police officer guarding him when he was visiting his seriously ill son in hospital in 1996.

Ulster Unionist leader Steve Aitken said the banners “need to come down, no two ways about it”.

Belfast City Council workers were flanked by police as they removed the banner on Monday.

Supt Melanie Jones said police were in attendance “to ensure the safety of persons removing a banner from council property”.

“Enquiries are under way to establish if these banners constitute any criminal offence or offences, including a hate incident or hate crime,” added Supt Jones.

‘Hatred and division’
Sinn Féin leader Mary Lou McDonald said there had been an “appalling and dangerous” campaign of “harassment, intimidation and threats against John Finucane and his family”.

He is a candidate in next month’s Westminster election in the North Belfast constituency, which is also being contested by outgoing DUP MP Mr Dodds and Nuala McAllister of the Alliance Party.

Mr Finucane’s father, Pat, was a solicitor who was shot dead by loyalists at his home in north Belfast in 1989.

The PSNI said it had also received reports about banners erected in south Belfast, adding enquiries were being made.

“The banners that have been erected in Belfast targeting John Finucane and Claire Hanna seeking to sow hatred and division are disgusting,” said Mr Eastwood.

“Those responsible are cynically using, abusing and retraumatising victims for narrow political purposes.”

#NorthBelfast From today #JohnFinucane has caught up with Dodds in the betting stakes, now neck in neck -looks like Finucane could pull ahead as momentum

seems to be building for his anti-Brexit/pro-remain message! #SouthBelfast Doesn’t look good for E.Little-Pengelly in 3rd spot 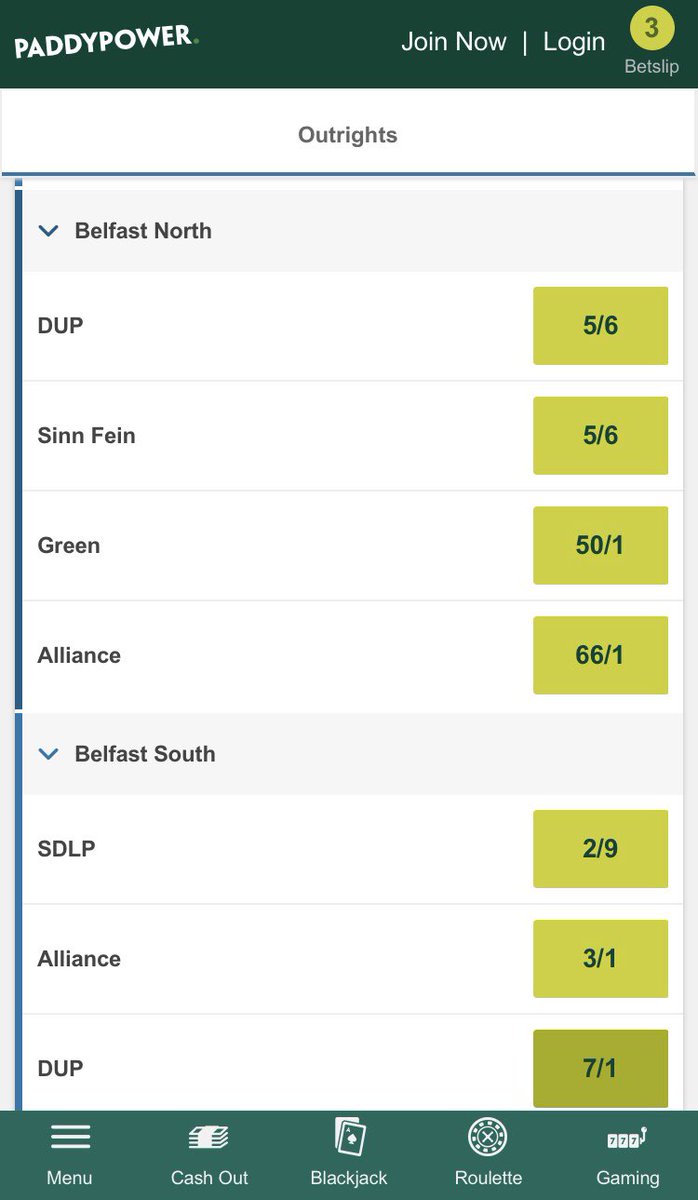 % correct-#SouthBelfast is drifting further by the day from the #Dup grasp as it now seems the #UUP are up for a scrap there after being intimidated out of the #NorthBefast fight by loyalist paramilitaries-a dish serve cold it seems in SB.

With many thanks to: Seán South for the original posting on Twitter@Seanofthesouth

Irish Deputy PM: If this is the final proposal, there will be no deal

The leader of the DUP has warned the Irish Foreign Minister Simon Coveney that he is rejecting a reasonable offer in Boris Johnson’s latest Brexit paper.

Arlene Foster accused Mr Coveney of paving the road for a no-deal Brexit if he rejects the proposal.

Speaking in the Dail on Thursday, Mr Coveney said there would be no Brexit deal if the paper put forward by the Prime Minister is the final proposal.

“The Irish government’s majoritarian desire to ride roughshod over unionism was one of the reasons why the Withdrawal Agreement was rejected,” she said.

“Mr Coveney’s rejection of a reasonable offer is paving the road for a no deal exit because unionism will not allow Northern Ireland to be trapped at the whim of Dublin or the EU. We will not buy that,” she said.

“The Irish government’s preparedness to dump the consent principle for their country’s expediency is foolish in the extreme and sends a very clear message to unionists.

“From our 2017 Manifesto to Paragraph 50 of the December 2017 Joint Report, the consent of the people of Northern Ireland for specific solutions has been key.

“It is at the heart of the Belfast and St Andrews Agreements, yet the Irish Foreign Minister is now railing against it because it doesn’t suit his agenda.”

The Irish Government regarded the proposal as a serious proposal and that was why their response is a cautious one, he said.

“But if that is the final proposal there will be no deal. There are a number of fundamental problems with that proposal.”

He said it would not be the basis of a final agreement, “but I hope it will be a stepping stone” – saying that there are serious problems with the proposals for customs checks, the role that would be played by the Stormont Executive and a veto for any party on whether to stay in the agreement.

“The incendiary and outrageous comments by Leo Varadkar and his Foreign Minister are a clear ramping up of rhetoric designed to derail any realistic prospect of a deal,” he said.

“The flippant Dublin reaction to the Prime Minister’s proposals has also exposed the reality that the Irish government would never have consented to the United Kingdom leaving the backstop if it had been implemented.

“Our message to Leo is simple. He should reflect on his comments and his intransigent approach.

“He is destined to go down in history as the Taoiseach who restored a hard border between Northern Ireland and the Republic of Ireland because his friends in Brussels will insist on it.”

On a visit to Sweden, Mr Varadkar said Boris Johnson’s Brexit plans “fall short in a number of aspects”.

Mr Varadkar said there were five ways to avoid a hard border – the reunification of Ireland; the Irish Republic re-joining the UK; the UK remaining in the single market or customs union; the border backstop mechanism; or the UK reversing the Brexit decision.

“There are one in five ways that this can be done, and at least four of those would be acceptable to the Irish government, but the best one is of course a backstop or some form of backstop, and that’s what we are trying to achieve,” he said.

With many thanks to the: Belfast Telegraph for the original story

Statistical analysis of polling trends has suggested up to three DUP MPs could lose their seats in a snap general election.

Speculation has been mounting Prime Minister Boris Johnson could attempt to call an election for November in a bid to bolster his support in the House of Commons.

The Conservative party – which has a confidence and supply arrangement with the DUP for the support of its 10 MPs – has a working majority of just one in the Commons.

In a report in the Sunday Times, Belfast-based pollsters LucidTalk suggest DUP MP Emma Little Pengelly will lose her seat based on analysis from polling firm YouGov.

It suggests Alliance could dramatically take the seat with 35% of the vote with Ms Pengelly taking 21% – a drop of nine points – with the SDLP, which previously held the seat coming in with 11%.

The study suggests in both constituencies the DUP are marginally ahead of Alliance.

In East Belfast, which Naomi Long famously wrestled from the clutches of Peter Robinson, the party is sitting on 41% support, two points behing the DUP.

While in South Antrim, the party could see its vote share soar to 32%, one behind the DUP, the polling suggests. In the last general election the party managed a 7.4% share of the vote.

Alliance has seen a surge in its vote at the ballot box during the Stormont stasis.

In May’s European Elections Naomi Long took the second seat after weeks of specualtion she could pinch the third seat from the UUP.

And just weeks earlier in the local government elections, the party broke new ground in constituencies it had never had representation before and saw its vote share increase almost 5% to 11.5%.

With many thanks to the: Belfast Telegraph for the original story

Senior DUP members have been in Chequers for a private meeting with the prime minister.

The DUP said the meeting was a useful opportunity to remind Mrs May that they want the Stormont Assembly restored.

They added that they wanted the result of the EU referendum delivered in a way which “strengthens the union”.

The confidence-and-supply pact the DUP shares with the Conservative Party is due for renewal next month.

A spokesperson for Downing Street said the prime minister held a “private political meeting” with the DUP at her residence.

With many thanks to: BBCNI and Jayne McCormack Political Reporter for the original story

GUNMEN built a makeshift platform to launch a carefully planned attack on police in a built-up area of North Belfast. A rifle found a short distance away from the attack in Ardoyne on Thusday night was thought to have been dumped by the gunmen as they fled.

The military issue Kalashnikov-style automatic weapon was taken away for forensic examination. It was found in an alleyway a short distance from Butler Walk where the gunmen had erected a platform from scaffolding at the side of a high wall. Shots were fired at a convoy of police vehicles at around 7.10pm as they traveled along the Crumlin Road en route to the loyalist protest camp at Twaddell Avenue in North Belfast. Police said three armoured vehicles came under fire, two of which were towing illuminated warning signs towards the Ardoyne interface. At least 10 bullets hit two of the vehicles. While no-one was hurt, Assistance Chief Constable Will Kerr said the officers were shaken by the attack. “These dissident republicians have absolute contempt for their own community”, he said. “They fired military grade weapons, in a highly built up area. “There is no doubt the principle target was police officers.” The senior officer said he beleived the weapon recovered was linked to the attack. A silver Passat car hijacked on Thursday morning in the Poleglass area of West Belfst was also found burning in Elmfield Street in Ardoyne.

The attack was launched out of range of the Twaddell camp occupied by loyalists protesting against a ban on parading through Ardoyne.

Around 40 familes in the area were moved from their homes, with many not permitted to return until yesterday evening while police carried out follow-up searches at several locations. Holy Cross Primary School was also forced to close as a result of the police operation. SDLP councillor Nichola Mallon said the people of Ardoyne want those responsible to “get off their backs”. “This is the latest incident to cause major disruption in the area,” she said. “Between the nightly protest parades and the car that was hijacked in Jamaica Street and used to transport the bomb into the city centre, people are concerned things are spiralling, that every time Ardoyne appears on the news it is for negative reasons and that is not an accurate reflection.” Shame Fein assembly member Gerry (the mouthpeice) Kelly said the attack “endangered the local community in Ardoyne”. “Anyone could have been in the vacinity of Holy Cross Chapel at this time which was the direction in which the shots were fired,” he said. “The PSNI were traveling to Twaddell Avenue where they are in place each night in order to prevent illegal marches past Ardoyne. The people of Ardoyne understand this. “Whoever was behind this attack need to come forward to this community and explain their actions.” DUP MP for North Belfast Nigel Dodds said: “This would obviously appear to be the work of dissident republicians and I would hope that the community in Ardoyne will stand against those responsible and with police as they carry out their investigations.”

With many thanks to: Allison Morris, The Irish News.