THE UVF killers of Bobby Moffett have been granted immunity.

One of the most notorious peace-time murders is set to remain unsolved as it has emerged those believed to be responsible have received so-called ‘comfort letters’ telling them they are no longer under investigation. The Sunday World understands those who ordered the murder and those who carried it out have been handed a get-of-jail-free-card. According to sources, UVF chief John ‘Bunter’ Graham is one of a handful of people believed to have been told they will live out their lives without the prospect of prosecution. Moffett, who was a member of the Red Hand Commando, a sister organisation of the UVF, was shot dead in broad daylight on the Shankill Road in North Belfast in May 2010. His funeral was one of the largest seen on the Shankill in living memory and sparked a backlash against the UVF.

Moffett’s murder was ordered and sanctioned at the highest level of the terror organisation. The low-level RHC member was murdered in the most brutal manner. Shot in the face twice by two loyalist terrorists using shotguns in broad daylight as he made his way to a meeting, his death sparked outrage in the loyalist heartland. It is now believed the UVF leadership have been assured they do not face police action. The assurances were given in the wake of the killing in an attempt to keep the UVF leadership on board the peace train. The issue of ‘comfort letters’ has been controversial with a number of high-profile IRA members benefiting-but less attention has been paid to loyalist killers. The Sunday World has previously revealed the UVF used immunity from prosecution as a bargaining chip in return for delivering the terror group’s move away from violence.

The UVF has murdered more than 30 people since the organisation declared its ceasefire a quarter of a century ago. The revelation that British secret service agents have been protected and now afforded immunity will spark outrage. The security services used loyalist terror groups will remain hidden. Graham, who is in poor health, is believed to have worked for MI5 for more than 40 years and is understood to have campaigned for years for protection from prosecution for a raft of murders in return for a cessation of violence. The failure of his organisation to ‘transition’ from violence is known to have caused serious frustration at government level. Moffett’s murder  – among 32 others since their ceasefire – sparked the greatest controversy.

The Sunday World understands that Graham, his second in command and a small clutch of others are in receipt of letters. The shotgun used to kill Moffett was stolen from a farmhouse in Co Antrim. The murder weapon was handed to low-level UVF operative Andy ‘Hard To Kill’ Aiken in the minutes after the shooting. Aiken, who was ostracized from the terror group and descended into a spiral of drug abuse, was found dead at a house in South Belfast 18 months ago. He had been arrested and questioned about the Moffett murder but was released without charge.

Aiken was one of the two killers and it was his contacts in the loyalist village area of South Belfast that helped destroy the gateaway car. Once a trusted UVF member, Aiken had been sidelined by the group as he turned increasingly to drink and drugs. It has been said the organisation became concerned that he could be vulnerable under interrogation due to his addictions. The UVF’s continued involvement in violence has been a major issue in the corridors of power and the revelation that senior figures have been granted state sanctuary is understood to have created friction within the security services. According to sources the issue of comfort letters has ‘clouded the waters’ and has made tackling legacy issues difficult. The failure to press cases against the UVF leadership has raised questions about what the British government and security services have to hide. Loyalist paramilitary sources have told the Sunday World that the Moffett murder was supposed to be a watershed, but became a roadblock because of assurances given to alleged agents such as Graham.

The view has been backed up by security services who claim a raft of unsolved murders will remain ‘on the books’ because of the use of British agents and so-called comfort letters. “If anyone thinks these issues and cases will be resolved then think again. “The [British] government has made promises and they have to stick by them, it works for them and works for the UVF.”

With many thanks to: Richard Sullivan for the EXCLUSIVE original story for the Sunday World –richard.sullivan.sundayworld.com

A SHOOTING in Coleraine at the weekend may be linked to loyalist Paramilitaries operating in the town.

Three adults and two young children were in the House at Loughanhill Park when two masked men entered the property and fired a number of shots shortly after 11.30pm on Sunday. Detective inspector Peter McKenna said: “Two of the children were downstairs, and the adults were in the kitchen when the gunmen fired a number of shots, some of which struck the kitchen table. “The suspects then left. “Thankfully, no-one was injured during this reckless attack that was carried out by faceless thugs who clearly have no regard for the safety of others.

“What is clear is that the hypocrites who carried out this violent attack don’t care at all about the children in the community. “There is absolutely no justification for an attack like this, and we must all work together to bring those responsible to justice and stop this from happening. “An investigation is under way to establish why this attack occurred and who is responsible. “I want to take this opportunity to appeal to anyone who has information about this incident, or who was in the area, prior to around the time the shooting occurred, and who saw anything out of the ordinary to contact detectives in Coleraine on the non emergency number 101, quoting reference number 1782 of 09/02/20 or Crimestoppers on 0800 555 111.”

With many thanks to: The Irish News and Allison Morris for the original story

Victims disgusted that Elim Pentecostal Church won’t meet them to hear their concerns about employing UVF serial killer Alan Oliver – linked to 14 murders, including those of schoolchildren. “They are hiding behind God & harbouring a psychopath,” they tell me in 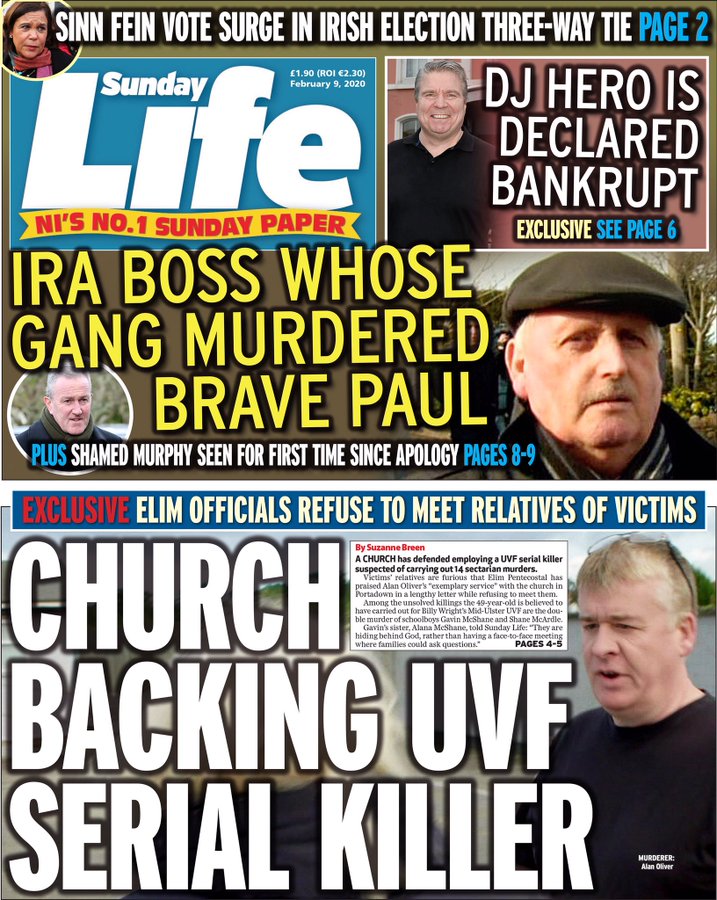 11:38 AM · Feb 9, 2020·Twitter Web App
With many thanks to: Susanne Breen for the original posting on Twitter@suzyjourno

South East Antrim UDA chief Gary Fisher is today exposed as a liar over promises that he ditched a drug dealer questioned by cops about the murder of innocent Glenn Quinn.

In the aftermath of the horrific Carrickfergus killing, the loyalist godfather told UDA men that Colin Simms had been abandoned by the terror gang.

However, this picture proves Fisher’s words to be false. It shows how hated Simms played a leading role at the wedding of David ‘Dee Dee’ McMaw (31), who last year was cleared of the UDA feud murder of ex-UDA boss Geordie Gilmore.

The 39-year-old served as a groomsman along with McMaw’s older brother Darren ‘Mushy’ McMaw (35), and ‘Scotch’ Brian McLean (38), who were also acquitted of the UDA killing.

The four later took to the floor to dance to loyalist anthem Simply the Best alongside other figures closely associated with the terror gang.

Images of the wedding, which were widely shared on social media, have angered rank-and-file members of the South East Antrim UDA disgusted at the murder of harmless Glenn Quinn.

The 47-year-old, who was battling an incurable liver disease, was beaten to death at his Carrickfergus flat on January

His crime in the eyes of the UDA was to badmouth the group over arson attacks it carried out on a garage business owned by his friend Joe Dunlop. Colin Simms has been linked to these attacks.

“The picture of Simms at Dee Dee McMaw’s wedding proves that Gary Fisher is a liar,” a UDA source told Sunday Life.

“The day after Glenn Quinn was murdered he held a meeting and told everyone there that any UDA man arrested in connection with it were out on their own.

“Colin Simms was arrested, so then how was he able to go to a wedding with other South East Antrim UDA men three weeks later?”

As part of his police bail conditions Simms has to live at a house in Larne and is banned from entering the Woodburn area of Carrickfergus where Glenn Quinn was beaten to death. Arrested alongside him were a 38-year-old man and a 48-year-old female who were also freed on bail with restrictions on their movements.

However, these conditions did not prevent Simms attending Dee Dee McMaw’s wedding last week at the Loughshore Hotel in Carrickfergus.

The pair, along with fellow groomsmen ‘Mushy’ McMaw and ‘Scotch’ Brian McLean enjoyed a mammoth boozing session, posing for photographs together draped over a stairwell.

Simms is hated in Carrickfergus for killing popular local girl Stephanie Horner in a car crash while drunk and high on drugs.

He served a five-year prison sentence for causing death by dangerous driving.

In 2015 the UDA thug narrowly escaped jail when he was given a suspended jail term despite pleading guilty to importing £350,000 of cannabis and possessing the drug with intent to supply.

Simms was back behind bars for a month in 2018 having been convicted of criminal damage and doing a provocative act. The offences were linked to UDA feuding in Carrickfergus.

Police are investigating reports that in the days leading up to Glenn Quinn’s murder, the loyalist assaulted the former barman – a claim he denies.

As part of their probe detectives seized a dog which accompanied the four-man UDA gang when they burst into their victim’s flat armed with baseball bats and iron bars. DNA samples taken from the property that may identify the killers are still being examined.

Vulnerable Glenn was beaten so badly that he suffered multiple broken ribs and his family had to keep the lid on his coffin throughout the wake.

With many thanks to the: Belfast Telegraph and the Sunday Life for the original story

Dark Horace
@DarkHorace
It’s going to be interesting to see how loyalists, who say they’re going to resist the so called BETRAYAL ACT, caused by the DUP and their own government, can twist it so that they can shoot an innocent Catholic leaving a pub. It’s they’re answer for everything, and always was.

@paulmurphy68
Replying to
@DarkHorace
John Taylor has already disgracefully warned SF voters in the South that they will only provoke the UDA /UVF. Reverting to type.

Iv read a few articles from “ loyalist s “ wanting to boycott all Irish goods , leave them on the shelves to pass their sell by date they say

Dark Horace
@DarkHorace
The complete opposite, and they know it. We’ll see how big they are without the back up.

Pea jay
@Hoofhea33595863
Replying to
@DarkHorace
I’d say they’d need to be very fkn careful before going that route,
With many thanks to: Dark Horace for the original posting on Twitter @DarkHorace

Máirtín
@Mairtin_MacG
In the last week there was another UDA bomb attack in Derry. There has been a long campaign by the UDA to ethnically cleans areas of Derry. Yet the press and the DUP remain absolutely silent. The UDA in Derry have been as active as the NIRA but are virtually ignored.
6:52 AM · Feb 2, 2020·Twitter for Android

Lizard King
@CiaranD55177506
Replying to
@Mairtin_MacG
I never heard this before now ?

With many thanks to: Máirtín for the original posting on Twitter @Mairtin_MacG

With many thanks to: Ian McKenzie for the original posting on Twitter